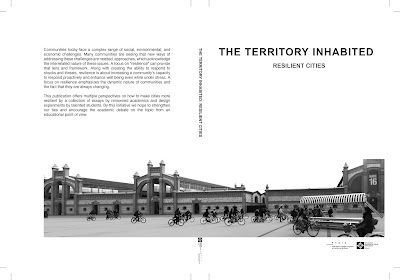 Communities today face a complex range of social, environmental, and aeconomic challegnes. Many communities are seeing that new ways of addressing these challenges are needed, approaches, which acknowledge the interrelated nature of these issues. A focus on "resilience" can provide that lens and framework. Along with creating the ability to respond to shocks and threats, resilience is about increasing a communituy's capacity to respond proactively and enhance well being even while under stress. A focus on resilience emphasizes the dynamic nature of communities and the fact that they are always changing.

This publication offers multiple perspectives on how to make cities more resilient by a collection of essays by renowned academics and design experimets by talented students. By this initiative we hope to strengthen our ties and encourage the academic debate on the topic from an educational point of view. 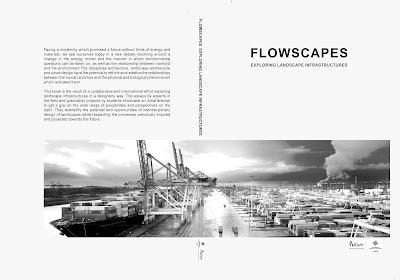 Facing a modernity which promised a future without limites of energy and materials, we see ourselves today in a new debate revolving around a change in the energy model and the manner in which environmental questions can be taken on, as weel as the relationship between mankind and the environment. The disciplines architecture, landscape architecture and urban design have the potential to rethink and redefine the relationships between the human activities and the physical and biological phenomenon which activates them.

This book is the result of a collaborative and international effort exploring landscape infrastructures in a desgnerly way. The essays by experts in the field and graduation projects by students showcase an initial attempt to get a grip on the wide range of possibilities and perspectives on the topic. They exemplify the potential and opportunities of interdisciplinary design of landscapes while respecting the processes previously induced and projected towards the future. 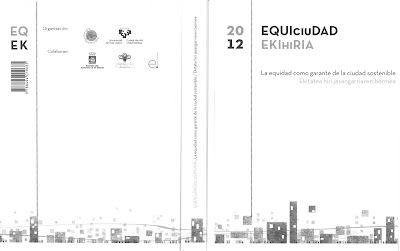 Elena Farini, a researcher at Urban Habitat, participated in the conference on sustainability EQUIciuDAD2012, city and architecture, which was held in San Sebastian last 13 and 14 December 2012.

"Co-existences Tomorrow and Tomorrow is the realization of a project between universities, professors, students, neighborhood associations and politicians on social and urban issues of Sanchinarro, one of the new suburbs of the city of Madrid" 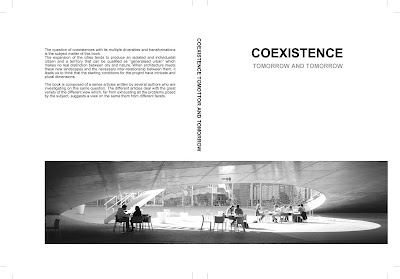 The expansion of the cities tends to produce an isolated and individualist citizen and territory that can be qualified as "generalised urban" that makes no real distinction between city and nature. When architecture meets these new landscapes and the necessary inter-relationship between them, it leads us to think that the starting conditions for the project have intricate and plural dimensions.

The book is composed of a series of articles written by several authors who are investigating this same question. The different articles deal with the great variety of opinions concerning these issues and far from exhausting all the problems posed by the subject, they suggest a multi-faceted approach to the question. 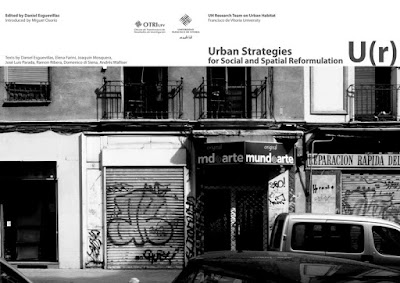 This book is an assemblage whose content derives from the urgent search of urban strategies for the social and spatial reformulation of metropolitan cities, in a moment that encourages thinking and acting differently to ensure the sustainability of the welfare state and fo fight against the growing urban inequalities. The work from the Urban Replay research project has been divided between the Theory and Practice sections. The former comprises the research posters that organize chronologically the conclusions of the group's meetings, and seven reserach texts on differente spatial and social strategies. The latter includes some information needed to understand the intervention area in Madrid, illustrated with impressive photographs by Joaquin Mosquera, as well as graphic material reflecting the group's activities. 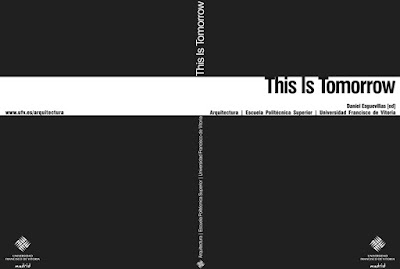 During the past five years, "Proyectos en Ingles" has been a space for testing new social and cultural approaches to Architectural Design within an English language teaching frame. The architectural Projects in English curriculum focuses on future spatial and theoretical discourses on our way of living. Architects hould play a leading role in the redefinition of our contemporary environments and their adaptation to current necessities. Communication becomes a critical element if we want to share this knowledge with the world and the English language is the main key to interaction in our globalised context.

With this volume, our editorial goal has been the assemblage of the different experiences lived at Francisco de Vitoria University, for their preservation as a living memory of the interesting conclusions that emerge from the interrelations of the diverse work contained herein. The curriculum has involved instructors of Architectural Projects and English Linguistics from the School of Architecture and the Graduate Department of Languages, respectively, under the direction of the former.

This book is a series of articles written by several authors - an open and plural view that examines how our urban environments have become unique places in which time has its frame and manifests itself. The aim of “Times and Cities” is to question the way in which our urban environments have become unique spaces for the inscription and the manifestation of time. The issue of time and, more specifically, of time “in” the city is of the utmost interest, given the level of urbanization that our planet is currently experiencing. Now, the question is how to reconcile people’s life rhythms with the “space-time” of a territory in order to address the challenges of both individual and collective spheres. 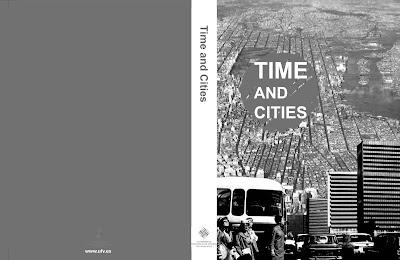 This book originated, in its initial stages, from the reflections that came from two workshops carried out by the Schools of Architecture of Madrid (UFV) and Lyon (ENSAL) and whose subject of study and little was: “Time and City-Inhabiting the present time”. This second part of the book presents an explanation of the pedagogical approach of both workshops, as well as a selection of the works made by the students. It was necessary to study ways of economizing an urban space, searching for proposals for habitable spaces which can be considered “collective housing” and at the same time conform to the generic typology known as a family living space. 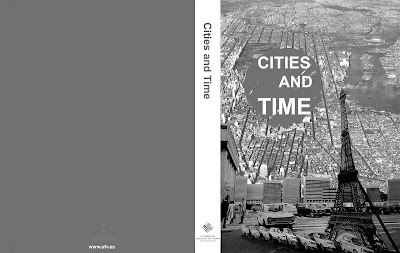 
This book looks at different intensities and densities in Coimbra, Portugal. Both subjects have a relationship to the field of architecture and urban planning: intensity is the gradient flow of people in a period of time and density is the capacity of a building or area to host a number of people. Each group of students observed density and intensity within a certain theme or subject area. Those areas include: trade, population, equipment, activity, full and empty, green areas and transport 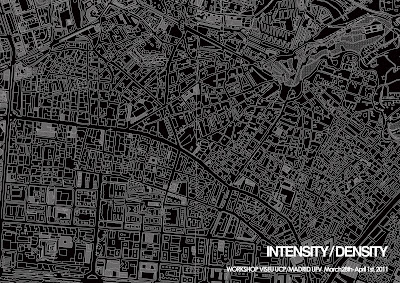 This book looks at different densities and intensities in Tetuan, a northern zone of Madrid. Both subjects have a relationship to the field of architecture and urban planning: density is the capacity of a building or area to host a number of people and intensity is the gradient flow of people in a period of time. Each group of students observed density and intensity within a certain theme or subject area. Those areas include: trade, population, equipment, activity, full and empty, green areas and transport. 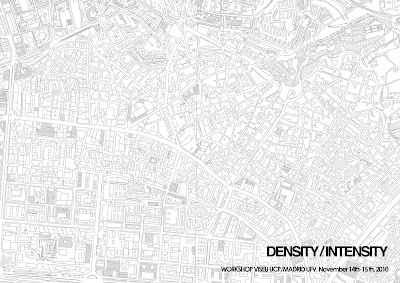 This book includes proposals about housing situated on the Lyon-Confluence zone. Each student group designed a contemporary habitat that reflects the ideals and values they believed were necessary in the context of this zone. The plans and images connect the project with its surroundings, highlighting the combination of different housing typologies, social awareness and varied ways of life in present day society. 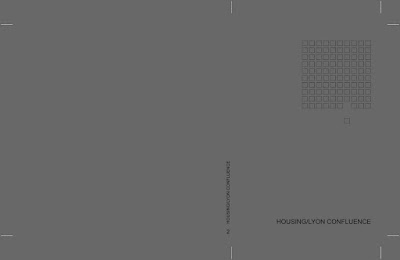 This book consists of a number of student projects about Urban Planning in European cities. These projects address rationalization of the environment, uses and programming, memory and mutation, city substance, mobility and scale of territory, temporality and boundaries. Students researched the best processes with which to address the city’s issues and impact within these themes. 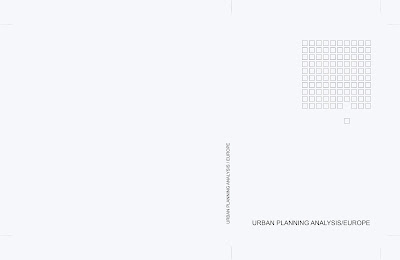 INHABITING SUSTAINABLE TERRITORY
Author: Elena Farini + C.Widerski + UFV + ENSAL Students
The pedagogic orientation of this book responds to questions that are currently circulating amongst those responsible for transforming our environment. Examining a territory “generalized as urban”- one that does not make real distinction between city and nature- and the questions of sustainable development that are applied architectonic objects should also be applied to urban planning. 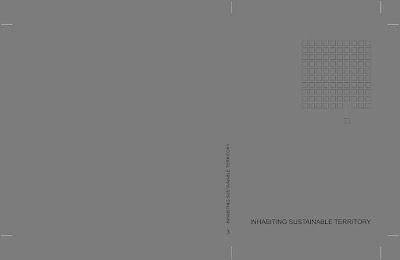 In researching new territory paradigms, we must understand territory as the appropriation of a space by a group of people for their physical, social and cultural reproduction that is configured by its topography, vegetation and fauna. The architecture of today is, or pretends to be, a reflection of the ideals or thoughts of the previous generation that built it. Sociability and leisure, infrastructure, nature and virtual conditions are crucial points of inhabited spaces. 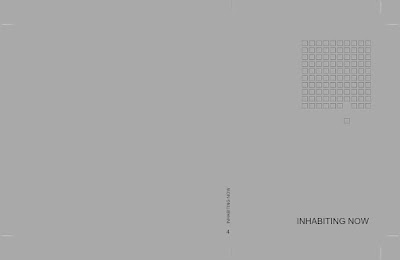 LA CITÉ DU TEMPS.
Author: Elena Farini + C.Widerski + UFV + ENSAL Students
The workshop in Lyon was focused on creating an exhibition design for the exhibit “La Cité du Temps” in Geneva. “La Cité du Temps”, also called the “Pont de la Machine”, was once built to serve as a hydraulic dam, redirecting the waters of the Rhône to supply Geneva with water. Later on, it was turned into an electrical station that powered streetlights throughout the city and has become one of Geneva’s historic landmarks. In 1995, the Swatch group purchased the “Pont de la Machine” and refurbished it into an exhibition centre open for both public and private use. After staying in Geneva, the exhibition will travel to Rome, Seville and Paris.